I moved to Blue Skies Village, an apartment building for low-income seniors aged 62 and up, in a suburban area surrounded by woods and in sight of the Great Smoky Mountains.

When I was 62, I had visited the building and loved it — it's extremely well-maintained, very clean, quiet, and decorated and landscaped beautifully.  The building manager [#1] (who was beloved by all the tenants, but was fired about a month before I moved in) was warm and friendly towards me. So I got on the waiting list and stayed with a good friend for about six months before an apartment opened up for me.

I moved to Blue Skies Village very soon after I turned 63, as I would have been homeless if I couldn't find affordable housing.  I am disabled, on a low amount of SSI disability, and have no family at all.

Because my first encounter with the building manager [#1] was so positive, I expected that everyone would be welcoming, warm and friendly. But when I moved in, there was a new building manager [#2] who was far from warm — she was very brusque and kind of — well — scary, at least to me (and to quite a few other tenants as well, as I was soon to find out). She had no idea how to treat seniors, not to mention seniors who were encountering problems in the building.

A few weeks after I moved into Blue Skies Village  a group of about 10 tenants were having a loud party right outside my door. Little did I know that this group functioned as "The Guardians" [a group that bullies to control others and get their way] and their party had been going on for over an hour, despite the fact that our building has community rooms, a living room, a large screened-in porch and extensive landscaped outside space with comfortable places to sit. In fact, hall gatherings are against the rules here.

I politely asked if they could move to one of the communal spaces because I had a really bad headache, and their voices were really loud in my apartment.

This group refused to move from the hall. One of them yelled a snide retort at me.

I'd never in my life been bullied, so I had no idea what might happen; I was badly bullied after that event.

The next day, the bullying began, which included spreading rumors (lies) about me, standing outside my door and yelling nasty things to me, complaining to the manager about awful things I was doing (which I wasn't doing), starting a petition without my knowledge to get me evicted because I was smoking in communal spaces, which I'd never done (smoking is allowed in our apartments), and slipping notes through my door telling me I was going to hell because I didn't love Jesus.

I'm the only Jew in a building where everyone else is an evangelical Christian. I am well aware the individuals who live here are not acting out the commands of tolerance, love, kindness and acceptance that Christians, and we as Jews, strive for.

This group spent most of their days sitting by the front door of the building, watching who was going out and coming in, and they would get silent and glare hatefully at me when I walked in or out, which made me VERY uncomfortable, and I ended up being afraid to leave my apartment.

I finally, after about a month of this treatment, gathered up enough courage to tell the manager [#2] what was going on. I didn't give her any names, but she knew who I was talking about. The problem was, she was very close to the ringleader of this group, plus she was an authoritarian, lacking in empathy individual with no prior experience as a building manager — so she did nothing except talk to the ringleader, who told her falsehoods about me and accused ME of bullying "The Guardians." The problem went on for about another month. I had to enter treatment for severe depression and anxiety.

Finally, encouraged by my counselor, I called our building's district coordinator, who is in another state.  She told me to document all incidents of "The Guardians" bullying me, both past and present, and she made a special trip here to talk to me - and she believed every word I said, and every word I had written down.

She held a community  meeting with ALL the tenants — except for me, because she wanted to protect me from the unpleasantness she knew would arise.  Apparently "The Guardians" screamed and yelled and showed their true colors at the meeting. I don't know how or if they were disciplined, or what the district coordinator and other tenants said to them — they're all still living here — but I was never bullied again, and am now on a friendly, but distant, basis with a few of "The Guardians."

Actually, over the 9 years I've been here, a few members of "The Guardians" attempted to bully me again once or twice, through false complaints, but their efforts went nowhere because their lies were so outrageous that even the unpleasant building manager didn't believe them.

One complaint was that I had gone into the community room during an "Art Club" gathering and had a screaming fit, with profanity and all, because the "Art Club" group had colored Latin crosses for Easter and tacked them up on the bulletin board.

Number one, I am extremely quiet and shy, and never raise my voice, let alone have a screaming fit!  Number two, I am somewhat of a hermit, and never go into the community room, except for twice-yearly mandatory community meetings. So the first building manager said she knew I hadn't done that, and she felt really silly asking me about it, but it was part of her job to investigate all complaints.

And the building manager [#2] was fired about two years ago. Our new building manager [#3] is a gentle, sweet, compassionate, and fair individual, and there hasn't been any bullying at all since she's been here. Tenant compliance with COVID-19 safety measures has been about 98 percent, with only one or two not wearing masks and pooh-poohing social distancing.

It was a good ending. I'm very grateful for that.  And it makes me sad that the ending is unusual, because I'd love to see everyone who gets bullied to have a such a positive resolution to his or her situation.

I couldn't get through life without my sense of humor. And actually I found this pretty darn amusing.

I guess when people live or work in the same space, some sort of ridiculous drama is bound to pop up here and there, but why do some people feel a need to manufacture it?  Makes no sense to me. 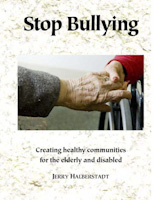